Kimberly contacted me this morning (via email) asking if I would re-post her latest article about what is happening right now in Darfur, Sudan from her blog as a guest post.  Our family has been sponsoring Mary, one of the orphans in the Make Way Partners Sudan orphanage since January 2009, so this hits pretty close to home for us.  Consider sponsoring an orphan – click here to find out more.

Today, We Face Our Worst Times with an Insane Hope. *Warning* Graphic Images!

Eight years ago, a friend of mine and Milton’s, who is a director for Voice of the Martyrs, said to me, “Kimberly, what you’re doing to protect children from human trafficking is wonderful, but if you really want to help the most vulnerable women and children, you’ll go to Sudan.”

I was so afraid, it took me nearly 9 months of pleading with God to “let this cup pass” before I finally submitted to His call for me to go. My life, my husband’s life, the life of Make Way Partners –along with many of you who sacrificially give to support this work—has never been the same.

That first trip into Darfur, I met a little girl, Teresa, whose life—and senseless death—taught many of us that the choices we make in our daily lives really do make a difference, can save lives, and do have the power to usher in our Father’s Kingdom, one child’s life at a time.

It was Teresa’s story that motivated me to spend months in the desert of Darfur working with our first indigenous leader Lual Atak to protect hundreds of orphans from the slave raiders.

But when hyenas killed nearly 280 of our orphans in just 10 months, we caught a tiny glimpse of God’s broken heart and knew we had to do more.  So we launched the most insane campaign of Hope ever imagined—we built the first orphanage in Darfur, Sudan—nearly 2,000 miles of pave-less bush away from our nearest supply chain in Nairobi, Kenya.

These years have been a transformational haven for nearly 600 orphans who—through your love and support—have been consistently loved, fed, sheltered, and educated in the name of Christ.

Through the years, God has brought us other faithful indigenous partners, like Romano Nero. Under Romano’s direction, last year we opened a new orphanage in Southern Sudan, near the border of Uganda.

Here nearly 60 more orphans receive the same love and protection as we offer in Darfur. When I visited in April, it was astounding even to me to see the results of Romano’s labor. Orphans who he’d literally pulled from their mother’s decaying bodies—and who were so malnourished they couldn’t even hold down solid food—were singing, playing, and learning their alphabet!

After eight years of love, toil, danger, and sacrifice, the enemy roars louder today than ever before. As the GOS, or invading Islamic regime of Northern Sudan, rears its ugly head against the July 9thday of official Southern Sudan independence, they are attacking on every front.

The GOS has sworn that if Southern Sudan pursues independence, their retribution will be harsher than any of their past wars. The reality of their threat is already coming home.

The village where this brutal slaughter took place has no military significance whatsoever. The motivation is none other than terror and genocide, enacted through bombing, rape, and slavery.

The Sudan Tribune reports, “While there are UN troops in the Nuba Mountains they have largely served no purpose. If truth be told, they are actually exacerbating the situation. First, they do little more than largely observe the violence and certainly nothing to attempt to halt it. Second, two sources inside the Nuba Mountains, both of whom must remain unnamed, reported that Egyptian soldiers with the UN were seen raping local women in Kadugli as the latter sought sanctuary from the surrounding violence.

I’ve spent the entire morning in secluded prayer crying out to God for His direction in our response to such evil. “What would you have Your Hands and Feet to do oh Lord?” 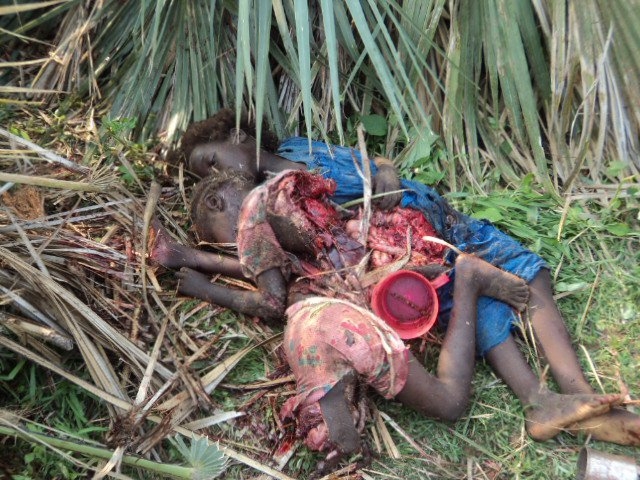 First of all, I know that He would not have His Body ignorant. So, as painful as it is, please help us to spread the news of this holocaust that is happening on our watch.

A few years ago, we took our children to visit the Nazi concentration camp of Dachau. They couldn’t believe the stories they read about the Germans claiming to not be aware of the holocaust happening under their noses.

Since then, the world has spent the last six generations pointing our fingers at the Germans. Yet, here we sit not wanting to know what is happening today—in our generation—for the same reason, it is painful to know—and it calls for our response.

I am asking you to speak out, share this story, and inundate your congressman with your demands for US pressure on both the GOS and China, who funds much of this genocide in exchange for oil.

Christ calls us to participate in His suffering, and nothing grieves Him more than oppression upon widows and orphans. This is our opportunity to share in the work of the cross as it hammers against the vilest assault known to mankind, gross profit made at the expense of the defenseless.

Matt McGowen, our Field Coordinator, and I are preparing to return to Sudan in late August with a small American team. You can take part in this journey by helping us raise $150,000 in relief supplies—including food, medicine, tarps, tents, and diesel for the safe transport of people and supplies.

While this effort represents only a small portion of what is needed over the long haul, it will mean the literal difference between life and death today for widows and orphans hiding out in the bush.

A gift as small as $50 will provide a tarp (for shelter) and a month’s supply of food for one widow and her children.

Through these last 8 years, we’ve seen over and over again the difference our presence makes, like with Immanuel. When local police first found this sickly boy, he told them his name was Tong-Tong, which is a local word for LRA, the militia who’d murdered his mother. Locals began calling him Tong-Tong after the LRA left him orphaned.

The police said he was so thin, they didn’t know how he stood upon his stick-like legs. The police took him in, but he couldn’t hold down their food, and they were not able to properly care for him.

When Romano came through, they introduced him to Tong-Tong. Romano brought him into the family of Hope for Sudan, and gave him a new name—Immanuel.

When I visited Hope for Sudan in April, I could barely believe this healthy, happy, affectionate child was the same malnourished boy I’d met through pictures just a few months earlier. The presence of God shot through the gaps of his toothy smile like rays of sunlight breaking through crystal.

Recently, Romano took Immanuel to visit his home village. An older sister saw him and called out, “Tong-Tong!”

Immanuel stopped her, “That’s not my name anymore. I am Immanuel.”

Everyone of you who has shared in this wild journey of God to fight for the Fatherless has been drug through the darkness with each of these children, and you’ve shared in indescribable joy as God redeems their brokenness, as He did with Immanuel.

As we once again step out in the same insane hope that fueled us nearly 8 years ago, we languish, we fear, we doubt in our distress, and we cry out in our suffering—“How long, Oh Lord?”, but we do not give up. He has delivered us, and He will deliver us.
Love, your broken sister along the journey,
k